What helped you progress when there are so few women at your level (Master Instructor, Tech Instructor Trainer)?
I never lost the passion. I never took breaks in my career or had to. The last instructor course I worked on, there were three women and two men. The tides are turning. 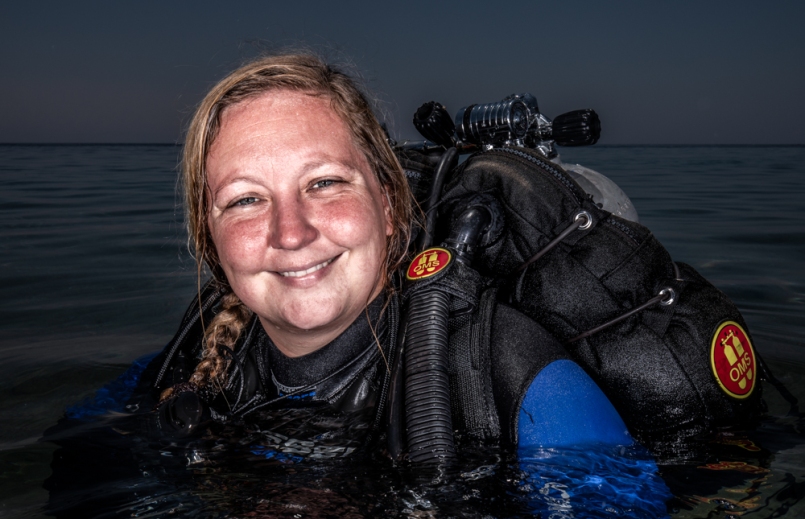 How did you start diving?

I started diving in 1997, in a pool in Turkey. I did a pool intro and then the next day went into the sea.
There was hardly anything to see, but it was just an amazing experience.

I did my open water when I was 14 years old, also in Turkey. We went back every year after that.
My mom and I dived together once. She was terrified but I was like “this is amazing!” I’d always spent my holidays in a mask and snorkel anyway so felt really comfortable.

When did you go pro?

I did my Divemaster and IDC in 2009 in England.

Naturalist specialty was our specialty, look at that rock and look at the round rock over there! <laughs>

What made you do it?

My mom made me get a degree, but I always knew what I wanted to do.

I was like ‘no, I’ll take a gap year…’ and she was like ‘No-no,’ and to be fair she was right.
I did my degree in business & marketing. I was going to do something marine related, but that took four years and I didn’t want to wait that long to become an instructor.  I’m glad I did it now, being a business owner, it’s been useful.

Walk me through your career.

The first place I worked was in England. We did lots of trips to Egypt with customers. That was for about a year. I worked for a conservation company in Tobago for 5 months. It was a volunteer place, my role was as a scuba instructor. I got everyone to at least advanced before they surveyed the reef. And then I came here to Dahab.

It comes after a staff instructor has assisted on a certain number of IDCs (this is the PADI OWSI instructor course) and taught a lot of courses!

My friend and I had a race to who could get to MI first and I beat him.

What advice would you give to women interested in a career in diving?

Languages help, but I’d rather employ an instructor I know and trust.

Do you speak any languages?

And for women interested in a more traditional or maybe more meaningful line of work?

What is traditional? But meaningful? When you take someone who is scared of the shower and in a week they are loving the underwater world or you get an 18 year old DMT and in 6 months they are taking out people on their own because they can and they’ve earned that trust and responsibility… That’s meaningful.

Without a lot of divers we wouldn’t understand the underwater issues that are going on in the world. That is meaningful.

Do you feel like there is anything different about your experience as a woman in the industry compares with say, that of a man’s?

People didn’t expect that much of me when I started. I was 23. There were a lot of little patronizing comments.  When they realized it didn’t make a difference what reproductive organs I have and I did know things, I got respect.

In the last ten years in particular we’ve seen things grow. But ten years ago, being a female tec instructor was a whole different ball game. I’m not sure I could have done it.

So tec diving. The dark side. What brought you over?

Getting into tech diving was something I always wanted to do. But when I became an instructor, I wanted to know more about what I was teaching. Also, my dive centre is so close to the blue hole, I wanted to make the most of being near such a famous site.

What do you think helps get more women in diving?

The more active pro females there are, the easier it will be. The active communities like Girls that Scuba help people, as well as having examples and representation.